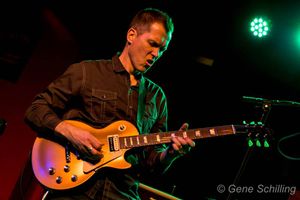 Guy Miskelly is a freelance guitarist and guitar instructor from St Thomas ON.

Guy started playing guitar at an early age and it wasn't long before he was performing for audiences.  During his high school years he played in several bands performing at talent shows and community events.

After graduating from high school in 1992, Guy attended Mohawk College in Hamilton Ontario studying jazz with some of Canada's finest musicians.

Since graduating from Mohawk College in 1995 Guy has become an in demand guitarist/guitar instructor and is well versed in playing styles ranging from Country, Rock, Blues, Jazz and Classical.  As a solo acoustic guitarist (The Wedding Guitarist) Guy has added his musical talents to compliment weddings and special events throughout southwestern Ontario.

Some of the artists that Guy has performed with are Genevieve Fisher, Sarah Smith, The Groove Station, Laura Rose, Doug Varty, Tara Oram, Karen Grainger,  Jonathan Russell as well as touring throughout North America with a variety of  Tribute shows.